How Much Mulch Do I Need? 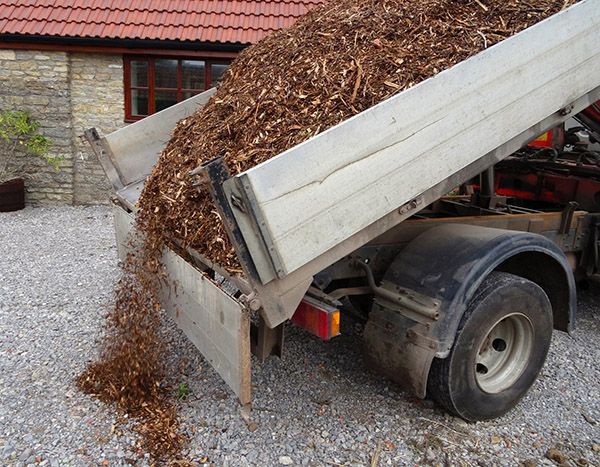 It’s a questions we get asked all the time: How much mulch do I need? Well first, what is the purpose of mulching a garden?

First of all, when planting a garden, it’s best to plant into a layer of nutritious topsoil. Many people use compost, as it is extremely nutritious for new plants. Some also use a mix of compost and the native topsoil. The benefits of using topsoil are many. It neutralizes the pH of the soil so that it can hold more nutrients, leading to faster growth and healthier plants. Also, it helps encourage the soil food web, which is a mini-ecology of organisms living in the soil who clean water and air, moderate water flow through soil, and make certain chemicals available in the soil that would otherwise flow down to groundwater. Finally, the decomposing organic material in compost provides a ton of nourishment that the plants would not otherwise get.

So, now that we know why it is so important to use a good topsoil, why cover it in mulch? The aesthetic value of a layer of mulch is most obvious. You can’t really do much to existing flowers and bushes to make them look spiffier in the short term, but a fresh layer of mulch makes any yard look like a picture from a magazine. It may seem insignificant, but a layer of a crisp black or deep brown mulch creates a great base for a garden, allowing your plants to pop even more. When I picture the house with the white picket fence of the American dream, I see and smell fresh black mulch.

But mulch also has a few practical benefits that may surprise you. First off, it prevents water from the topsoil from evaporating, sealing in moisture for the plants to use. This maximizes the advantages of the topsoil, which is so important for growing big and healthy plants.

They can also release nutrients and good chemicals over a longer period of time than the compost. A lot of mulches have the same or similar beneficial chemicals fostered by the soil food web, but the mulch releases those over a longer time frame, providing a more lasting source of nutrients. A buffer of mulch also insulates the soil, protecting the plants from drastic changes in temperature that can be harmful.

An under appreciated advantage of mulch is that it prevents annoying weeds by blocking sunlight to the ground so that new and unwanted plants can’t grow. Have you ever had to use a tarp to kill a persistent invasive weed like knotweed? It’s a hard, quite long, and usually unproductive process, since they are hard to eradicate once they take hold. But mulch defends against these pests preemptively, sparing time and effort in the future.

People lay anywhere from under an inch to four inches of mulch, depending on the circumstances.

The first consideration is air flow. You don’t want to spread a layer more than about three inches for most mulches, because that kind of thickness can deprive the topsoil and plants of important chemicals in the air. But, in areas where you don’t want anything to grow, you can lay as much as you want. Different plants also require different levels, for example, a flower like a rose might only need an inch or two while you would want to put down three or four inches around trees.

Another consideration is the drainage of the garden. If you live in an area that receives heavy rainfall or your garden is at the bottom of a hill and does not drain well, you would want to limit the mulch layer to two inches. Just as mulch seals in moisture under it, it can make it harder for puddles to drain through it.

So you know how deep you want the mulch, and you have a certain area to put it. How much mulch do you actually need? Well, mulch is sold by the cubic yard, so there are few quick calculations to make to determine how much mulch to buy. First, measure the area you want to mulch by foot, to make it more precise than yards. Then, say we want a two inch layer of mulch. Multiply the area in square footage by the depth in inches. This adds up the layers to see how much we need total. Divide that number by 324 (since a cubic yard of mulch covers 324 square feet at one inch depth. I advise to liberally round up, because it will usually save you a trip to the hardware store for more.

However, if you don’t want to do the math yourself or go to the store at all, Saunders landscaping has mulch calculators on its website and free delivery on mulch. If you were already on the fence about mulching, they basically eliminate all of the work besides physically laying the mulch. If you’re a seasoned gardener, it makes things that much easier.