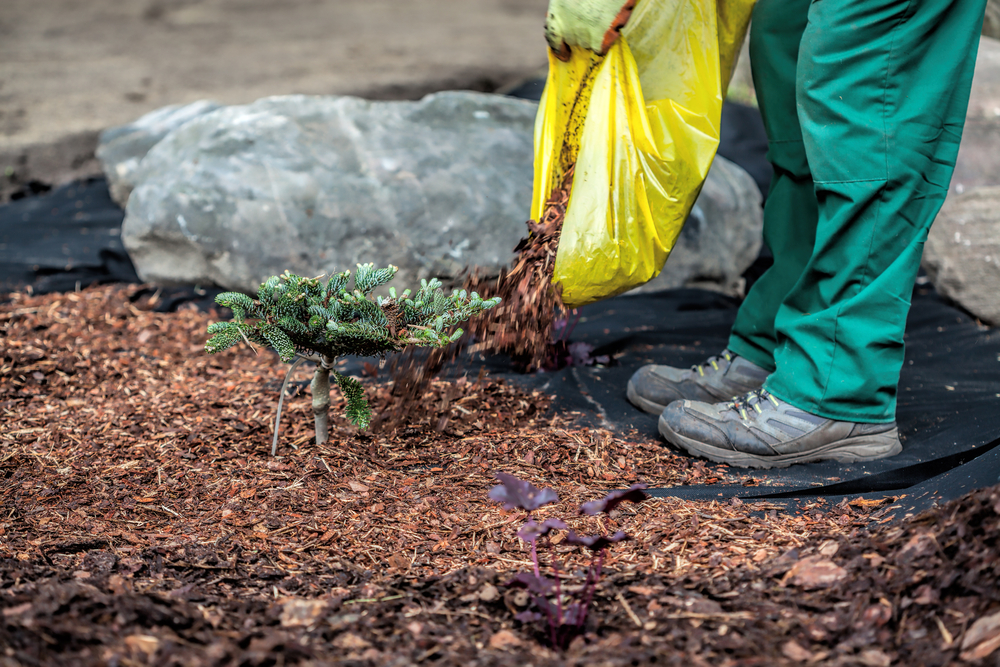 When people first start landscaping, their minds almost immediately go to the image of a well-manicured lawn, with some flowers, trees, and bushes. And often, when that image comes to mind, so does the image of mulch, which is often put around trees and other decorative plants to help retain moisture and prevent weeds, which are every homeowner’s worst nightmare.

Mulch is the landscaper’s best friend, because it provides important nutrients to the plants it surrounds and allows for easier maintenance of the areas in which it resides. Unfortunately, for first time landscapers or mulch buyers, it’s very hard to correctly measure the area you need mulch for, and even harder to get the right amount of mulch to fit that area. Mulch calculators on some mulch delivery websites can help you figure out how much you need. If you get the wrong amount, it often results in leftover mulch, and contrary to misconception, mulch can be stored for later, but it’s important to do it properly, or it could go bad. Yes, bad.

You might be curious – isn’t mulch supposed to decompose? Isn’t that the whole point? Yes, it is, but when we say ‘mulch goes bad’, we don’t mean it like that. Mulch naturally decomposes over time, like all organic materials, and that’s where the benefits for the plants come from. But left too long, or stored improperly can result in the mulch ‘going bad’ – souring, growing fungi, getting infested with insects or weed seeds, becoming slimy, or even molding.

How Can I Tell When My Mulch Goes Bad?

A good way to tell when mulch has gone bad is if it smells like rotten eggs or vinegar. Some people even compare it to smelling a skunk. And any smell like that is a sign something is wrong. Another sign is you’ve noticed the mulch had become infested with insects (such as ants or beetles), or has started to grow various fungi (such as mushrooms). And of course, if your mulch looks like it has a coating of slime on it, or it looks fuzzy, that’s also not good. Also, if it’s rock hard to the touch, then it’s no longer fit for use.

In some cases, the mulch can be saved. If it’s simply soured, you can break up the clumps with a shovel or hoe, water it down, and spread it out in a thin layer on a tarp to dry it. In other cases, such as the mulch has become infested or is moldy, it’s imperative to rake it out and dispose of it as soon as possible.

There are two other signs that your mulch has gone bad that aren’t as easily noticeable if you aren’t looking for them. These are ‘mulch volcanos’, and Hydrophobia. We’ll start with the mulch volcanos, which are actually quite common and so therefor often get looked over.

A mulch volcano is when mulch is piled around a tree more then 2-4 inches high. You often see it around new trees, or in big gardens, and it’s become a common practice. And while it seems harmless, it’s actually extremely dangerous. Having a level of mulch taller then 4 inches is extremely damaging to the tree, allowing the bark and wood to rot away underneath, and you wouldn’t notice until your favorite tree comes crashing down. Often, by the time people realize their mistake, it’s too late, and you have to get a new tree. And by the time you’ve done that, the soil around where the tree had been will probably be unfit for use, as will the mulch around it. Mulch works by blocking out light (therefor eliminating weed growth by 96%), and helping plants retain their moisture by protecting the soil and roots from harsh sun. But when it’s stacked too high, like in the case of a mulch volcano, not only does it block off the sun, but air too. It’ll also trap water underneath, and won’t allow it to evaporate, therefor forming a pool around the tree. So the foundation of the tree will simply rot away, without access to oxygen and too much water.

The other rare sign is hydrophobia – the fear of water. Also called water-repellent mulch. It’s exactly as it sounds, by which I mean, water rolls right off. This happens when mulch is applied too deeply and allowed to sit for a long time without being turned over or moved. Hydrophobic mulch often occurs in the summer or fall, when hot temperatures dry out the wood of the mulch, which allows fungi to settle in and turn your mulch into a matted mess. This, as you can image, will easily kill plants, as plants need water to survive, and hydrophobic mulch doesn’t let any get to the soil. Luckily, hydrophobia is relatively easy to prevent – just maintain your mulch. However, once your mulch has become hydrophobic, it needs to be disposed of as soon as possible in order to save your plants.

How Do I Store and Maintain It?

Maintenance of mulch is actually pretty simple. After installation, all it needs is to be turned over with a rake every six months, and replace it when layers get thin (less then an inch and a half), become discolored, or are dead (meaning even if the mulch decomposes anymore it won’t help the plants). If the layers are thin or discolored, simply turn the mulch over with your rake and add a new layer so the mulch is about 2-3 inches thick. If the mulch is diseased or dead (it’ll fall apart in your hand like dirt when it is dead), then you need to scoop it all out, dispose of it, and install a new layer of mulch 2-3 inches thick, which should help your yard greatly.

Storing it is slightly tricker. If you bought mulch in bags and you have a lot of it, it’s best to spread out a tarp, rip open the bags, and dump them onto the tarp and spread it out. Put another tarp over to protect the mulch from the elements, and stake down the bottom tarp, leaving some areas underneath for ventilation. Keep it dry and away from pests, and it should last up to six months. If it is bagged but in small amounts, poke holes in the bags (small holes, should be about the size of two pencils together) and store them stacked on top of a tarp with another tarp draped over. And, of course, if your mulch is loose, just store it the same way you’d store a large amount of bagged mulch.

And, of course, once your mulch dies (because it will!), we’re here for you! We have many different types and colors of mulch, so give us a call to find your perfect fit today!