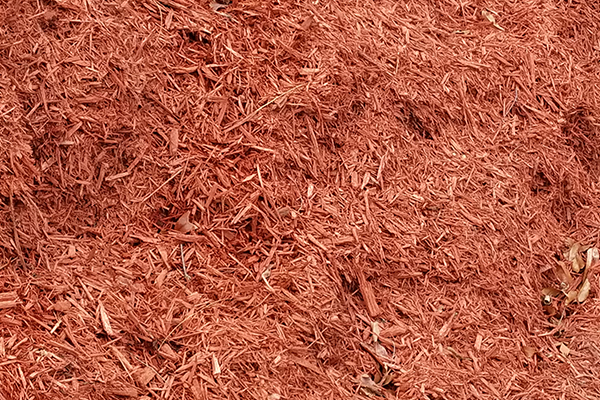 Red mulch revitalizes the look and health of gardens, flower beds, plants, and trees. Its plethora of benefits makes it one of the most popular landscaping products we deliver.

Red mulch is often the finishing touch of a well manicured garden. It provides the “shape” of the garden or tree, much like how the frame and shape of a canvas gives boundaries to a painting. The bold border line between your yard and garden gives definition to the landscape. Anything you plant in it gets a strong feeling of intentionality, and the overall effect is one of meticulous planning. With our color enhanced options like red mulch, you can play with your palette and plan out flowering plants with red mulch for an artistic look that adds a new dimension to landscaping.
Red mulch also works well as an accent for man-made landscaping elements. Having it around the perimeter of these features acts as a transitional space from the artificial to the natural. Your paved walkways, retaining walls and concrete stairs will flow seamlessly into your landscaping like they were put there by Mother Nature itself. Plus they won’t have unwanted plants growing over them because the red mulch keeps weeds at bay.

First, it suffocates weeds that have already germinated in the area. Apply a thick enough layer and the red mulch will prevent any sunlight from reaching the soil. In this environment, weed sprouts can’t continue to grow as they need sunlight to survive.

Second, red mulch obstructs new seeds. Weed seeds blown onto your red mulch will not be able to penetrate it. If the seeds can’t reach the soil, they can’t grow. You will need to apply a layer of at least 3 inches deep to ensure weeds cannot seed.

Red mulch generally helps soil retain its moisture. A layer of it keeps sunlight and wind from reaching the ground, meaning that the water in the soil will not evaporate as quickly.

Some types of mulch can aid your gardens and lawns by deterring pesky insects. Cedar mulch contains a compound called thujone that has a menthol smell which repels a large number of insects. Moths, roaches, termites, beetles, Argentine ants and house ants all hate cedar mulch. If you have an infestation in your garden or yard, consider installing a layer of cedar mulch.

Red mulch acts a lot like insulation acts in your home. It prevents the extremes of weather from affecting your plants. When the temperatures dip, the soil around your plants will retain warmth underneath a red mulch layer, promoting growth where the roots would otherwise be damaged. This effect even works overnight. When the sun is blazing, the layer gives the soil much-needed shade.

Every gardener knows the pain of soil compaction. The back pain specifically, as you work hours hunched over your garden with a hoe to loosen up the soil. After all that toil, you do not want to watch rain and foot traffic quickly press the soil back into a compacted mass. Compaction means roots struggle to break through the soil. Water and nutrients have nowhere to travel in compacted soil, and when water has nowhere to go, you get puddling and standing water, which can drown your entire garden.

It can be an important soil amendment. You can combine it with amendments like leaf mulch which decomposes into a natural soil conditioner, returning valuable nutrients to your garden and lawn, or with fertilizer so that rain can naturally disperse the nutrients evenly over time. Even red mulch without much nutrient value helps the soil beneath by holding any soil amendments you put down in place and preventing soil compaction, which allows the amendments to permeate easily.

The most critical step in laying down red mulch is knowing how much you need. You need 1 cubic yard for every 108 square feet. You can use our handy calculator to determine your exact needs.

Rake the area you plan on adding red mulch to and put all the debris to the side. Don’t throw it out. You will use some of it later.

Everyone’s least favorite step. Pull out the undesirable plants and dispose of them however you want.

Grab a power edger or an edging shovel and define your garden’s boundaries. Make sure to set your edges 6 to 8 inches away from trees or your home’s foundation.

Here is why we saved the debris from earlier. Find the organic material in this debris and add it back into your garden. It will return nutrients to the soil as it decomposes.

Add in your soil amendments, like fertilizer and pesticides. The red mulch will keep these in place better than if they were directly exposed to rain and wind. If you plan to use a weed cloth, lay it down now.

Lastly, spread the red mulch evenly over your garden. You want at least 3 inches of it everywhere to ensure that it traps moisture and retains heat at optimal levels.